Joni Mitchell lived here, in Room #323, at the beginning of her career, at the time she cut her first album “Song to A Seagull” in 1966. Her song “Chelsea Morning” (released on the album Clouds in 1969) pays tribute to the hotel that was her home: “Woke up, it was a Chelsea morning, and the first thing that I heard / Was a song outside my window, and the traffic wrote the words…”

Quentin Crisp (25 December 1908 – 21 November 1999), who had also been an occupant of #323, was an English writer, actor, and storyteller. Known as quite the character, Crisp wore fashionable clothing, makeup, and painted his nails. Crisp’s first stay at the Chelsea coincided with a fire, a robbery, and the murder of Nancy Spungen, the girlfriend of Sid Vicious. The Chelsea was certainly never boring.

Herbert Huncke (January 9, 1915 – August 8, 1996) an American writer and poet lived in this room, #828. Huncke is considered a founding father of the Beat Generation and in fact is reputed to have coined the term “beat”. He was idolized by many including  Jack Kerouac, Allan Ginsberg and Greg Corso. Huncke had been living for several years in a garden apartment on East 7th Street near Avenue D. Supported by friends, towards the end of his life, he moved into the Chelsea Hotel where Jerry Garcia (who had never met Huncke but respected him) paid his rent.

Brian Jones (28 February 1942 – 3 July 1969) was a founder and the original leader of the Rolling Stones and can be linked to Room #206. Jones and the Rolling Stones stayed many times at the hotel and often visited Bob Dylan next door.

Liam Neeson also shot many scenes for the Sidney Pollock-directed movie “The Kinsey Report” in this room.

Thomas Wolfe (October 3, 1900 – September 15, 1938) was American novelist active in the early twentieth century. His writings influenced Beat generation writers such as Jack Kerouac and Ray Bradbury. Wolfe lived in the Chelsea before his death in 1938. Near the entrance of the Hotel is a plaque commemorating his life and his time at the hotel. Wolfe had a suite in the hotel, and consequently the door to this room – #829 – and to the neighboring room of #831, were his.

Bette Davis, one of the greatest actresses of all time, occupied this room, as told by Jerry Weinstein, Chelsea Hotel front desk manager from 1979-2007. Davis stayed at the hotel many times. Iggy Pop, “Godfather of Punk” of Stooges fame, was a resident in the Chelsea Hotel for a brief time, as well as an intermittent guest, and can also be traced to this room. W.E.B. DuBois (February 23, 1868 – August 27, 1963) was the first African American to earn a doctorate. DuBois founded the NAACP with Mary White Ovington and Moorfiled Storey in 1909. DuBois’ collection of essays titled “Souls of Black Folk” was a foundational work in African-American literature. After W.E.B. DuBois’ last disagreement with civil rights activist Walter White at the NAACP, DuBois rented room #112 to use as an office in the Chelsea Hotel, and started the International Peace Conference out of it in February of 1950.

Virgil Thomson (November 25, 1896 – September 30, 1989) was a classical composer and critic. He was influential in developing the “American Sound” in classical music.  Thomson lived in Room #818, and at the Chelsea and established an artistic and cultural hub which included many of the most important artists and musicians of the 20th century orbiting in and around the Hotel. 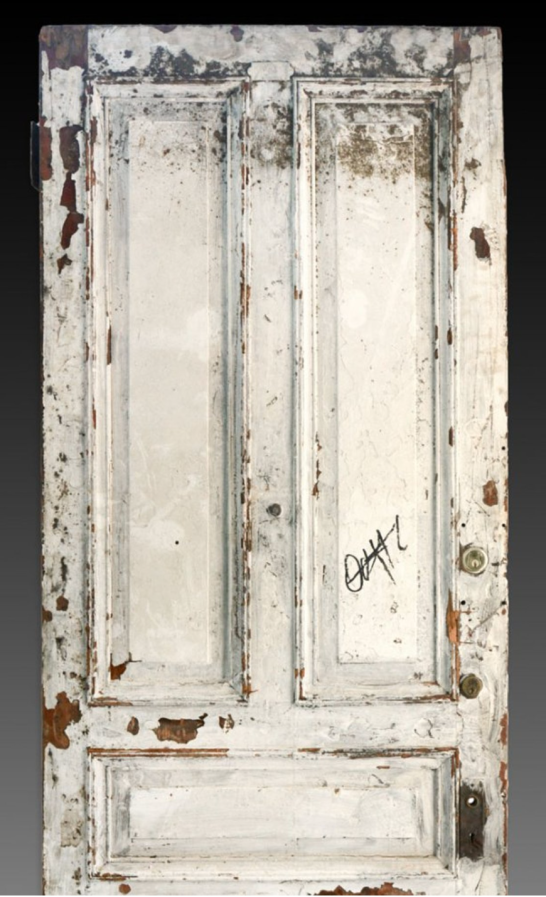 Bob Dylan lived in this room, #225, between 1968 and 1972. This room is where he reportedly conceived his son Jakob. Though the number plate on this door has been covered with whitewash, the number 225 is visible beneath. Apparently, another Chelsea resident, Dylan Thomas, was Bob Dylan’s inspiration to change his last name from Zimmerman. Dylan mentions the Chelsea in his song Sara, written to his first wife Sara Lownds: “Staying up for days in the Chelsea hotel/ writing ‘Sad Eyed Lady of the Lowlands’ for you.”

Thomas Wolfe had a suite in the Chelsea Hotel that included both room 831 and room 829. It was in 831 that Wolfe wrote his first novel, “Look Homeward, Angel.” This novel is a coming of age story centered around a young man, whose life was based on Wolfe’s.

Dee Dee Ramone, the founding member of the punk rock group the Ramones, also lived in this room in the 1990s. He spent this time at the hotel trying to get off drugs, and writing his book “Chelsea Horror Hotel,” which described his time there, and made mention of the ghost of rockers past who had stayed in the hotel (most infamously, Sid Vicious). 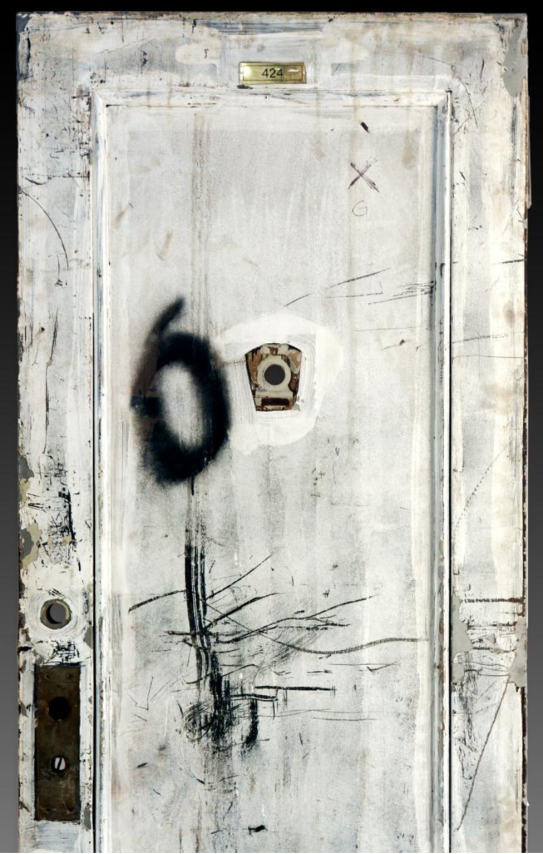 Leonard Cohen (September 21, 1934 – November 7, 2016) lived in #424 the longest of all his stays at the hotel and conducted an affair with singer-songwriter Janis Joplin in this room. In the late 1960s, Cohen had left his career as a successful author behind him in Canada, and moved to New York City, bent on becoming a singer/songwriter. His life, at least at first, was the life of the starving artist. His room at the Chelsea consisted of a bed and a bare bulb, as well as a sink that almost never worked. On the night of 1968, Cohen went out, in a troubled mood, for a bite to eat, then to the White Horse Tavern in Greenwich Village. Eventually he returned to the Chelsea at around 3AM. He entered the elevator, and as he did, a woman with wild hair entered as well. This, of course, was Janis Joplin. She was 25 at the time, living at the hotel as well, in town recording her album Cheap Thrills. Apparently, she was looking for Kris Kristofferson. She found Cohen instead, and the two ended up spending the night together. Cohen later wrote a song about his night with Janis, after her death, called Chelsea Hotel No, 2 (“I remember you well in the Chelsea Hotel / You were talking so brave and so sweet. You were famous, your heart was a legend / You told me again, you preferred handsome men / But for me you would make an exception…”) Joni Mitchell also stayed in this room with Leonard Cohen. The two had met at the Newport Folk Festival and began a romance. Despite their 10-year age difference, the two had an intense, though short-lived, affair. Humphrey Bogart (December 25, 1899 – January 14, 1957) was a cultural icon because of his role as the leading man in such film noir classics as Casablanca and The Big Sleep. Bogart came stumbling drunk into the hotel on a winter evening in 1951, apparently a victim of a domestic squabble. He proceeded to check into room #603, trash it, pass out, and check out late. This from one of the front desk workers at the Chelsea who had been on duty when Bogart arrived.

Paul Bowles (December 30, 1910 – November 18, 1999) writer and composer known for his novel turned film “The Sheltering Sky.” He was another for whom the Chelsea was an inspiring environment. Edie Sedgwick’s room, #105, was used to shoot scenes for Andy Warhol’s film “Chelsea Girls” and other Factory films. Directed by Warhol, with music by the Velvet Underground, and a budget of $3,000, Chelsea Girls is considered the first successful underground film in the United States. As the title suggests, the film focuses on residents and their lives within the Chelsea. The movie also featured, among many others, the singer Nico, whose song Chelsea Girls was based on the film.

Sedgwick was an actress and fashion model best known for being one of Andy Warhol’s “superstars.” In 1966, the same year that Chelsea Girls was released, despite repeated warnings from Leonard Cohen, Edie, who insisted on lighting candles in her room, fell asleep while candles were still burning, and lit fire to her room. The hotel moved her to a different area — considering her a liability after this. After suffering a nervous breakdown, she ended up moving out of the hotel a short while later.

Jack Kerouac stayed at the hotel at different times in his life, this door, to Room #406, led to one of the rooms he stayed in. One famous anecdote involving Kerouac and the Chelsea is when he and Gore Vidal spent the night there together. This was in 1953, before Jack was living in 406 and writing On the Road. Previous to checking in at the hotel, they went to the San Remo bar, in Greenwich Village, where Kerouac, as well as other creatives such as Tennessee Williams and Miles Davis would go to drink. Kerouac had originally brought along William Burroughs to meet Vidal but ended up interested in him himself. Vidal was heading home, but they ended up signing into a room at the Chelsea together instead.